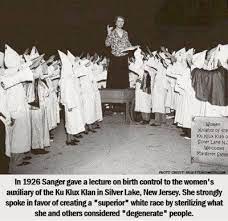 Hey, it only took 100 years! We’ve been saying all this for years but it’s been ignored. But hey, welcome to the party pals.

“Up until now, Planned Parenthood has failed to own the impact of our founder’s actions. We have defended Sanger as a protector of bodily autonomy and self-determination, while excusing her association with white supremacist groups and eugenics as an unfortunate ‘product of her time,’” Johnson wrote in the op-ed.