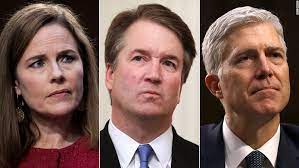 Remember those promises to win back the Supreme Court and overturn bad decisions that have stood for decades, like Roe v. Wade? Well, it turns out that, after having gotten three Supreme Court picks, the phony conservative legal establishment that advised Trump failed to even get judges who wouldn’t add new odious precedents. Now we are all paying the price for it – so much so that red states can’t even keep boys out of girls’ sports.

Last Wednesday, Southern District of West Virginia Judge Joseph R. Goodwin ruled that the state’s recently passed law barring men in female sports is unconstitutional. At a time when judges, including those appointed by Trump, are refusing to acknowledge a long-standing recognized right to bodily autonomy, Goodwin wrote that there is a right under the Fourteenth Amendment’s Equal Protection Clause to access the other gender’s sports. He also ruled, based on Gorsuch’s opinion in Bostock v. Clayton County, that the law violates Title IX, a federal education law that prevents sex-based discrimination, which was created in 1972, long before anyone thought about gender dysphoria.