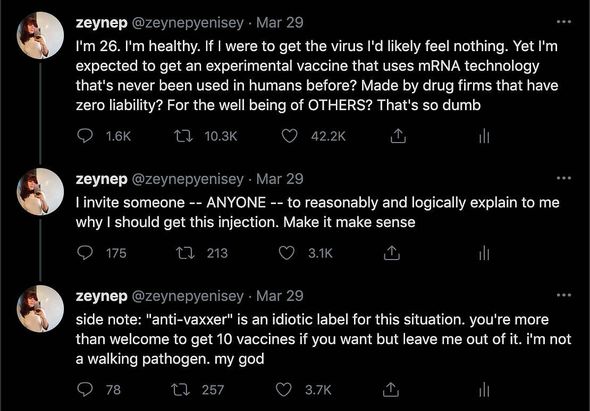 “They just nuked me without any warning or explanation,” Yenisey said. “I’ve never even gotten a temporary suspension or ever been asked to delete any tweets in the ten years I’ve been on Twitter. I thought they normally give you a slap on the wrist if you go into the no-no zone and temporarily lock your account if their useless A.I. decides it doesn’t like you. But no, they just went right ahead and permanently suspended me without any explanation and without giving me an opportunity to verify my identity.”

In a blog post on her personal website, Yenisey speculated that her account was suspended for ulterior reasons, noting that she was banned “after one of my tweets that softly went against the tightly controlled narrative went viral and got the attention and follows of the likes of Dr. Sebastian Gorka, master CRT-destroyer James Lindsay, and Ian Miles Cheong.”

Yenisey’s March 29 tweet, which was retweeted over 10,000 times, raised concerns about being asked to take an “experimental vaccine” when she is young, healthy, and at relatively low-risk of contracting a life-threatening case of COVID-19.