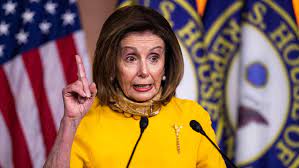 Speaker Nancy Pelosi (D-Calif.) said Thursday she has “no plans” to bring a Democratic-led bill to expand the Supreme Court to the House floor for a vote, while saying such an idea is “not out of the question.”…

“I don’t know if that’s a good idea or a bad idea. I think it’s an idea that should be considered and I think the president’s taking the right approach to have a commission to study such a thing. It’s a big step,” she continued.