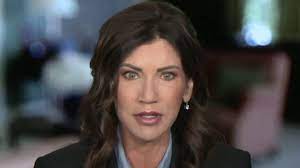 Gov. Kristi Noem hardest hit. Amazing what being a little courageous can accomplish.

“The NCAA Board of Governors made its announcement as more than two dozen states proposed, debated, and advanced legislation aimed at requiring state schools to ensure that athletes compete only in the category of their birth gender.

But now, only a month later, the NCAA announces that despite its saber-rattling in April, it will allow events in states that have already passed laws limiting transgender athletes to birth gender categories, Yahoo! Sports reported.

Over the weekend, the NCAA named Alabama, Arkansas, and Tennessee host schools for softball regionals. It has also been confirmed that Oklahoma City, Oklahoma, will host the Women’s College World Series once again. Though, all these states now have laws that put limits on transgender athletes, banning players born as males from playing in girls’ sports regardless of their claimed transition status.

The Women’s World Series generates $20 million for Oklahoma City, but the NCAA warned that it would take the games from the area over the state’s new law. That punishment, though, appears to have been scrapped.”