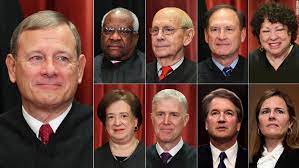 The Supreme Court sided unanimously with a Catholic foster agency in a dispute against the city of Philadelphia over whether it should be banned from participating in the city’s foster program because it excludes same-sex couples.

The group, Catholic Social Services (CSS), claimed that “Philadelphia’s attempts to exclude the Catholic Church from foster care” violated the First Amendment. Lawyers for the city, meanwhile, said that CSS “lacks a constitutional right to demand that DHS offer it a contract that omits the same nondiscrimination requirement every other FFCA must follow when performing services for the City.”

In a 9-0 ruling, the justices sided with Catholic Social Services.

“CSS seeks only an accommodation that will allow it to continue serving the children of Philadelphia in a manner consistent with its religious beliefs; it does not seek to impose those beliefs on anyone else,” Chief Justice John Roberts wrote in a majority opinion. “The refusal of Philadelphia to contract with CSS for the provision of foster care services unless it agrees to certify same-sex couples as foster parents cannot survive strict scrutiny, and violates the First Amendment.”